PreeAnn Johnson is the very proud Principal of James K. Polk Elementary. Over the past twelve years it has been her passion to foster a sense of community that results in a caring and dedicated group of parents, students and staff members.  Her academic career provided her with a Bachelor of Science in Human Development from St. Mary's College of Maryland, a Master of Education, specializing in working with emotionally disturbed students, from American University, and work toward her doctorate in Educational Administration from Maryland University. However, it is her experiences as a member of a large military family that has had the greatest influenced on her collaborative and emotional leadership style.

She has been in ACPS for 35 years, starting off at George Washington Middle School where she lead the Prexies to a Freshman Girls Basketball Championship.  When she started out, she also worked with the Alexandria Recreation Department for more than fifteen years.  Prior to becoming the Principal at Polk, she served as a Special Education Teacher, Student Services Coordinator, Assistant Principal at Douglas MacArthur, Cora Kelly and TC Williams Minnie Howard Campus. As an Alexandria resident, her daughter has been in ACPS since Kindergarten and is excited about being an official TC Titan next year.  So with all this time and work in the City, you can see why she has a sense of pride for Alexandria that is far deeper than her role as an administrator.  Ms. Johnson welcomes you to James K. Polk where every owl succeeds.

Mrs. Carter P. Carter became a member of the ACPS Family in August of 1996, at which time; she served as an elementary teacher for six years at Jefferson- Houston Elementary School.  Following her tenure at Jefferson Houston Elementary School, she became a Performance Evaluation Program Specialist and collaborated with administrative teams at several schools in the district to implement the PEP Evaluation System. In February of 2008, Mrs. Carter joined the Administrative Team at James K. Polk Elementary School as an Assistant Principal. As an Assistant Principal, she serves as the Special Education Administrator Designee. As the designee, she works closely with the School Support Team and teachers to brainstorm strategies and programs to assist struggling students with experiencing success.

Mrs. Carter views the opportunity for her to serve as an Assistant Principal at James K. Polk as an honor and takes great pride in the support that she provides students, staff and parents. Mrs. Carter often says, “At Polk, we can take care of our people!” She also applies the words of Rita Pierson in her work, "Every child deserves a champion, an adult who will never give up on them, who understands the power of connection and insists that they become the best that they can possibly be."

Mrs. Carter is a native North Carolinian and currently resides in Bowie, Maryland with her family.  She earned a Bachelors’ Degree in Elementary Education at North Carolina Agricultural and Technical State University and a Master’s Degree in Education Leadership at George Mason University. 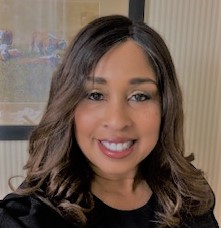 Mrs. Tillman began her career in 2003 teaching 4th and 5th grade for five years with Fairfax County Public Schools at William Halley Elementary. During her time in Fairfax, she also served as a team leader and mentor teacher. She moved to Texas in 2007 to take care of her family and began teaching 4th and 5th grade at Brandenburg Elementary School for the Irving Independent School District. In addition to teaching at Brandenburg for three years, she was a Cooperating Teacher for a student teacher as well as a member of the Campus Improvement Plan Committee. In 2012, she was promoted to a Testing Facilitator for Atherton Elementary in the vArlington Independent School District.  During her eight years with Atherton, she also served in roles as an Instructional Leadership Team Member, Science and Reading Vertical Alignment Team Lead, PBIS Tier 2 Lead, Assessment Committee Team Member, Gifted and Talented Liaison, All-Star Ladies Club Sponsor, as well as she taught ESL classes for adults in the evening.

Empowered with a strong desire to maximize her impact on her students and the community, Mrs. Tillman pursued a path of educational leadership and became a principal intern at Atherton Elementary for the 2017-18 school year. There, she supported teachers and staff to continue the school’s record of excellence, learned about practices that most greatly influenced student achievement and developed instructional leadership skills to better serve the students and throughout the district through collaboration with other school leaders.

Mrs. Tillman is quite excited about her next adventure in education where she will serve the students, families, and staff at James K. Polk Elementary as an Assistant Principal. Mrs. Tillman’s favorite quote is “Intelligence plus character - that is the true goal of education” by Martin Luther King, Jr. She loves this quote because she believes the function of education is to educate the whole child because in our society talent will get our students in the race but its character that will ensure success and get them to the finish line.

Mrs. Tillman is a native of Chicago and currently resides in Alexandria with her husband. She has two adult children and one grandson that reside in Dallas, Texas. She earned a Bachelors’ Degree in Finance from Southern Illinois University and a Masters’ Degree in Elementary Education from National-Louis University.