Upgrades to the Parker-Gray Memorial Stadium at T.C. Williams High School were approved by City Council on Saturday, including the addition of field lighting for the first time in the history of the school. City Council voted 6 to 1 in favor of the changes. The upgrades include the addition of an eighth lane of track, replacement of the artificial turf, the addition of restrooms, a new concession stand, a ticket booth, replacement and relocation of the scoreboard, egress safety lighting, a new press box, field lighting, and an upgraded sound system. Parker-Gray Memorial Stadium has long been in need of upgrades to bring its facilities into line with other high school stadiums across the DC Metro region. Since it opened in 1965, T.C. Williams High School has needed to schedule games at unusual and inconvenient times due to the lack of lighting. T.C. Williams High School is the only high school in the DC Metro region that does not have a lighted field.

The Parker-Gray Memorial Stadium will now be able to move into the twenty-first century and our students will get the facility they deserve. These upgrades will create a stadium that is aligned with our vision of creating world-class experiences and opportunities for our students,” said T.C. Williams Principal Peter Balas.

Enrollment has grown by 1,000 students since adding lights to the Parker-Gray Memorial Stadium was first discussed in 2003, and is expected to grow by a further 1,000 students in the next two years. In addition, technologies around field lighting and sound systems have both advanced dramatically in the last 15 years. Students from T.C. Williams joined staff, parents, coaches and community groups to tell City Council that athletics brought students from all walks of life together and helped create a sense of camaraderie at the high school.

Athletics is an important part of the academic experience for all our students, whether they are going to go on to be an athlete or not. Our goal is to take a holistic approach towards educating our students. What happens outside of the classroom is just as important as what happens inside the classroom in creating first-class experiences that prepare students for the real world,” said Superintendent of Schools Dr. Gregory C. Hutchings, Jr.

The City Council simultaneously approved a text amendment to the City ordinance to allow higher poles to be used on the Parker-Gray Memorial Stadium to keep glare to an absolute minimum. Upgrades to the sound system include directing sound into the bleachers through multiple small speakers to ensure all sound meets the City’s Noise Ordinance requirements.

We want to thank the City Council for their continued support of our schools and for joining us in striving to fulfill the strategic vision we have set out for the future of the school division as a whole. Taking our facilities into the twenty-first century can only be done through collaboration,” said School Board Chair Ramee Gentry.

On Thursday, the School Board passed a resolution (PDF) committing to mitigating the impact of the Parker-Gray Memorial Stadium updates on T.C. Williams’ immediate neighbors. The School Board committed to maintaining a comprehensive landscape and fence to strengthen the visual buffer and prevent students from entering T.C. Williams by scaling the fence, and to establish comprehensive security monitoring along the perimeter of the stadium area. 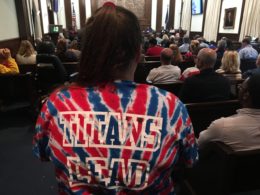 The School Board also committed to ensuring that the operation of the sound system is supervised by ACPS staff or an ACPS designee, that it will not be used for music, and will not be used during practice times even when the lights are on. ACPS will also measure the noise generated by athletic events once per athletic season and share the results with the City. In addition, ACPS will set up a T.C. Williams Neighborhood Forum for the discussion and resolution of neighborhood issues with the immediate neighbors, and will mail out a list of upcoming events requiring lighting and designate a community liaison or liaisons who will be accessible 24 hours a day to address community concerns. Work on upgrading the stadium is expected to begin in spring 2019 and take seven months to complete.